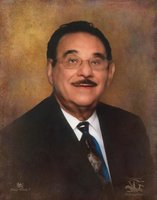 Born 8/24/1929-1/4/2020 Joseph V. Galati, 90, of Harrisburg passed away on Saturday, January 4, 2020 peacefully at home surrounded by his family. He was born in Santa Nicola, Calabria Italy. He is survived by his loving wife of 63 years, Camille (Barbush) Galati; a daughter, Maria (Mia) Galati; a sister, Rose Keffer and many nieces and nephews. He was preceded in death by his parents, Vito Galati and Maria Teresa Galati and a brother, Nick Galati. He was a graduate of William Penn High School Class of 1948; graduate of Penn State with a degree in Political Science; attended Northwestern University where he studied Traffic Engineering and graduated from University of Pennsylvania School of Wharton with a Master's Degree in Government Administration. Joe was an Air Force Veteran serving as a Military Police Officer. In 1960 he took the state civil service examination in traffic engineering and placed first place in the entire Commonwealth of PA. He worked for the PA Dept. of Transportation (PennDot) for 33 years. At PennDot he was head of the Research and Studies Section of the Bureau of Traffic Engineering. He was a member of the Capitol City Lodge #272 Sons and Daughters of Italy, the founding member of the Sons and Daughters of Italy Joseph V. Galati Lodge in Harrisburg; a State Chaplain for the Sons & Daughters of Italy; President of the Mortuary Fund; and a recipient of the Gold Medal; a 4th Degree Knight; President of the Latshmere Manor Civic Association; President of the Izaak Walton League; President of the March of Dimes for 20 years; President of the Institute of Traffic Engineers and authored 12 textbooks that are still being used to teach engineering published by the National Academy of Science Federal Highway Research Board. He was the only recipient of the John F. Kennedy Library for Minorities American Heritage Award. He was a member of Holy Family Catholic Church where he served as Eucharistic Minister, Ecclesial Lay Minister; a Lector, a Pastoral Assistant, and a member of St. Michael's Guard. A viewing will be held on Thursday January 9, 2020 from 5-8PM at the Dailey Funeral Home 650 S. 28th St. Harrisburg PA 17103 and on Friday, January 10, 2020 from 10-11AM at Holy Family Catholic Church 25th & Berryhill Sts Harrisburg PA. Mass of Christian Burial will be celebrated on Friday at 11AM. Burial will immediately follow at Resurrection Cemetery with military honors. The Galati family would like to express their gratitude to Dr. Brian Quirk, Dr. Jonathan Diamond, Dr. Jose Prudencio, the Fresenius Kidney Care, Keystone Compassionate Care and Aaron Johnson caregiver, and Trust Ambulance Service. The Dailey Funeral Home is honored to serve the Galati family. www.daileyfuneralhome.com