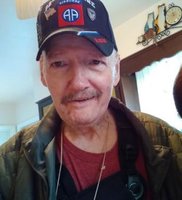 Ronald Theodore Wagaman, known among family and friends as "Wags," passed away in the UPMC Pinnacle Community Osteopathic Hospital in Harrisburg on Saturday, December 28, 2019, at the age of 75. Ron was born on July 14, 1944, to the late Grace Neoma (Triesh) and Frederick Theodore Wagaman, Jr., in Chambersburg, Franklin County. Ron spent his youth in Albuquerque, New Mexico, before moving with his family back to Harrisburg, where he attended Central Dauphin High School. He enlisted in the United States Army and proudly served from 1962 until 1965. He was an 82nd Airborne Division Veteran, stationed in Fort Benning, Georgia, and Fort Bragg, North Carolina, served as an Infantryman, and earned his Parachutist, Rifle Sharpshooter, and Expert Marksmanship Badges. After returning to civilian life, Ron lived for fifty years in Susquehanna Township. He was employed by Johns Manville and worked for 20 years at the New Cumberland Army Depot. He was a member of the Enola American Legion Post #751, the Central Pennsylvania Chapter of the 82nd Airborne Division Association, and the Susquehanna Township Lions Club. During the 1970s, Ron enjoyed coaching and serving as an umpire for boys' little league baseball in the Harrisburg area. He loved his family, fishing, making wine, playing cards, telling jokes, singing Karaoke, listening to Frank Sinatra, and watching movies and television in his retirement. He could build and fix just about anything. "Wags" was ever the life of the party, and his family and friends will always remember him for his amazing sense of humor and generosity. He is survived by beloved wife of over fifty years, Rosemary, and by his two loving daughters, Michelle Wagaman of Harrisburg and Heidi Abbey Moyer (Bradley) of Manheim, as well as by his grandson, Liam Abbey, and his two step-grandsons, Bruce and Adam Moyer. He is also survived by two nieces, Heather Casey (Matthew) and Sheri Drumheller (Edward); two nephews, Donald Wagaman, Jr. and Gregory Wagaman; two sisters-in-law, Patricia Casey and Linda Casey; two brothers-in-law, Thomas Casey and Steven Garrett; and several great nieces and nephews. He was preceded in death by his parents, his sister-in-law, Catherine Garrett, and by his only brother, Donald William Wagaman, Sr. of Fayetteville, North Carolina. There will be a viewing on January 2nd, 2020 from 6 pm to 8pm at the Gilbert L. Dailey Funeral Home, 650 S. 28th St. Hbg, PA. Burial will be held at 9 a.m. on Friday, January 3rd, 2020 at the Fort Indiantown Gap National Cemetery in Annville, PA. In lieu of flowers, please send donations to any of the following charities in Ron's honor. Wounded Warrior Family Support;http://www.wwfs.org/ Habitat for Humanity; www.habitat.org Hope for the Warriors; https://www.hopeforthewarriors.org/ National Alliance on Mental Illness; www.nami.org