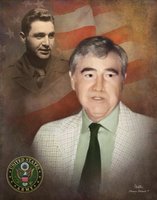 Thomas R. Dooley, age 95, of Lower Paxton Twp., passed away on Thursday, September 3, 2020 at Homeland Center of Harrisburg. He was the son of the late Alice M. (Burns) Dooley and John J. Dooley Sr. He was born in Larksville, PA. Luzerne Co. He graduated from Larksville High School and attended the former East Stroudsburg State Teachers College. He was a member of St. Margaret Mary Catholic Church, The Veterans of Foreign Wars, The American Legion and the National Association of Retired and Active Federal Employees. During WWII He served with the US. Army in the European Theater. He served in England prior to the invasion of Normandy. His documented battles and campaigns include: Normandy, Northern France, the Rhineland and Central Europe. He also received the French Jubilee Medal for the battle of Normandy. After WWII He was a civilian employee at the U.S. Air Material Area, Middletown, PA. and the U.S. Army Security Assistance Center, New Cumberland Army Depot, New Cumberland, PA., where He retired from Federal Service. His civilian assignments for the Army included travel to Middle East Countries and Japan. His subsequent employment was with Pennsylvania Department of Health and Welfare. Surviving are the Love of His life Geraldine “Gerry” G. Dooley of whom he celebrated 60 years of marriage. He is also survived by several Cousins. In addition to his parents he is preceded in death by a brother, John J. Dooley Jr. and a sister, Alice M. Dooley. A funeral mass will be celebrated on Monday, September 14, 2020 at 11:00 A.M. at St. Margaret Mary Catholic Church 2800 Paxton Church Rd. Harrisburg, PA. 17110. A viewing will be held at Dailey Funeral Home Thursday morning from 10 to 10:30 A.M. Burial with full military honors will follow at Indiantown Gap National Cemetery Annville, PA. The Dailey Funeral Home Is Honored To Serve The Dooley Family. 650 S. 28th Street Harrisburg, PA. 17103