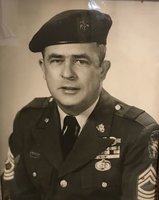 1st Sgt. Donald J. Bronson age 89, of Swatara Twp., passed peacefully on Thursday, February 11, 2021 at his home. Born in Mehoopany, PA.; on October 30, 1931. He is survived by his wife of 63 yrs. Pauline Barbush Bronson, his 3 children, Susan and husband John Allen, Donald J. Bronson Jr., and wife Petrine, Deanne and partner Eric Lewis, 3 Grandchildren Samuel and Sarah Watson, Mariesa Lewis and 1 Great grandchild, Ozzy Kline. During his lifetime he was known as “Bronson” He served in the U.S. Army and was in Korean and Vietnam Wars and was a paratrooper for 18 yrs. with the 82nd & 101st Airborne. He was also a green beret for 14 of his yrs. with the army. He retired after 21 yrs. as a 1st Sargent. He was a true Patriot who loved his country and was caught on camera by a neighbor who saw him salute to every flag he passed on his daily walks. ABC News did a story on him in June of 2020. After Army Life he became a Truck Driver and worked for Roadway and Smith Transfer. In his spare time he loved to ride his motorcycle and he rode it many places, even out west on his own to see the Grand Cannon, Mt. Rushmore and to many other sites. He was a loud fun loving person, the life of the party in his day. He was also very giving and helpful. He gave rides to those who needed them, visited the sick, and took family to Dr. Appts. and treatment. He was really good about visiting extended family and particularly the “Barbush” clan as he would say and his friends when alive from his hometown. He had a great life and will be missed by all. A funeral Mass will be celebrated at 11:00 A.M., Monday, February 15, 2021 at St. Catherine Laboure Catholic Church. A viewing will be held at church from 10 to 11 A.M. prior to Mass. Burial will be at Indiantown Gap National Cemetery on Wednesday, February 17, 2021 at 12:30 P.M. A celebration of life service will be held at a later date. In lieu of flowers donations may be made to www. woundedwarriorproject.org The Dailey Funeral Home Is Honored To Serve The Bronson Family. 650 S. 28th Street Harrisburg, PA. 17103. DAILEY