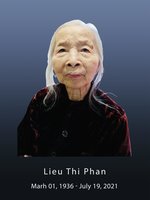 On Monday, July 19, 2021, Lieu Thi Phan at the age of 85 left this earthly realm to be with her maker. Still grieving over the loss of her only daughter (Nga Thanh T Ho) who died barely 6 months ago, Lieu Thi passed while surrounded by her devoted son-in-law and four grandchildren. Lieu Thi was also predeceased by her 3 sisters and her brother (Thanh K, Truyen T, Lu Thi and Linh Hong Phan), and also her husband Hung The Ho, who died from a car accident in Vietnam in 1963 on the very day their daughter was born. Hung The was Deputy Chief for the Vietnamese Department of Information at the time, stationed in the northern part of what was then a unified Vietnam. He was a good provider with a bright future and the Ho’s were a very happy family, but all of that disappeared with his untimely passing. Hung The’s siblings took control of his savings and his home, pushing Lieu Thi and her newly born daughter to the street. But Lieu Thi was a courageous woman with a strong faith and virtuous perseverance. She sold fish and served as a private-school teacher throughout the Vietnamese war until she saved enough money to afford her own house and eventually began what turned into a very lucrative Silk Trading business with one of her sisters, despite having to deal with the Vietcong regime and the confiscation of nearly 90% of her assets. She eventually followed her daughter along with son-in-law Khanh P Nguyen and her four grandchildren (Ngan HPK, Hoang B, Long T.H and Vuong H Nguyen) to the United States where she has lived in Harrisburg, PA since 2012 as an active member of the Holy Family church and a powerful source of inspiration and joy for her family. A viewing is scheduled for Friday July 23 at the Gilbert Dailey Funeral Home from 7 till 9 pm. Burial will be on Saturday, July 24 following a 9 am Mass at the Holy Family Church on 555 South 25th Street in Harrisburg. There will be a reception following the burial at Lin Hibachi Buffet.