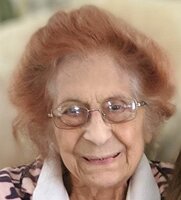 Virginia M Ross, 95, of Harrisburg PA, died Wednesday, July 20 2022 at her daughter's home. She passed away peacefully while lying in her bed watching her grandchildren (ages 3, 7 & 10) have a dance party. Virginia was born on May 15th, 1927 in Cokesville to the late Henry and Grace Ross. Virginia is survived by her daughter, Linda Kohr, two grandsons, David and Steven Kohr, and 4 grandchildren, Roman Kohr, Raegan Kohr, Nora Kohr, and Lucia Mina Algeria, and her cousins, nieces and nephews. She was preceded in death by siblings Annette, Susan, Joseph, and Frank; half-siblings Mary, Patsy, Salvatore, Charles, Albert, Ida, Catherine, and Edna. Virginia graduated from Derry Township High School in 1945. In 1952 she moved to Blairsville where she worked as a nurse at Torrence State Hospital. Shortly after Virginia moved to Erie where she worked as a waitress at a popular lakeside restaurant and had her daughter, Linda. She returned to Blairsville and attended night school to learn data processing and moved to Harrisburg after graduating to be a Key Punch Operator for the Department of Transportation. She retired from PennDot after more than 30 years of service but remained active until recently when she broke her hip and shortly after was diagnosed with cancer. After that, things happened very quickly. Virginia lived a long, wonderful life and was loved & cherished by many. The celebration of life for Virginia will be held on Thursday, July 28th at St. Catherine Laboure Church, Shrine of the Miraculous Medal, 4000 Derry St, Harrisburg, PA. The viewing is at 10am and Mass is at 11am. Burial service will follow at Resurrection Cemetery, 116 S Oak Grove Rd, West Hanover Township, PA. In lieu of flowers, the family is asking for donations to be made to the Virginia Ross Memorial Fund to help cover her final arrangements. Donations can be made here: https://gofund.me/4f7a8a90.