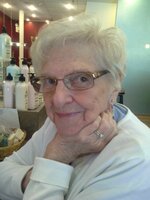 Dorothy Ann (Smosna) Ball, 93, of Harrisburg, PA, entered into eternal rest on Saturday, October 15, 2022. Born October 2, 1929, she grew up on Hancock St in McAdoo, PA. She was the daughter of the late John and Sophia (Billig) Smosna. Her father was a Polish immigrant and her mother was a first generation Polish-American. Her great grandparents and grandparents were polish immigrants. Preceding in death by her husband William in 2008 after 53 years of marriage, and her sister Mary Fritz. Dorothy was a devoted wife, mother, grandmother and friend. She was a homemaker and an exceptional baker who loved baking for her family. She graduated from St. Kunegunda Catholic grade school in McAdoo, and Hazleton High School in 1946. She was an avid Penn State football fan, and attended many football games with her family. Penn State was the alma mater of her late husband as well as her children. Her survivors include her sons William Ball of Herndon, VA; Robert Ball and daughter-in-law Dianne of Harrisburg, PA; daughter Denise Morganti and son-in-law John of Austin TX; grandchildren Jessica Ball (Ryan); Megan Vonakis (Nicholas); Lauren Coleman (Harrison); Jennifer Morganti; Samantha Morganti; nieces Paula Delucia (Tony); Pam Grabowski; great-nieces Lori Bucci (Chris); Amanda Peterson (Jeff); great-nephews Anthony Delucia; Nicholas (Jill) Grabowski. Funeral services will be held on Monday, October 24, 2022 at 11:00 AM at St. Margaret Mary Church, Paxton Church Road, Harrisburg. Visitation will be 1 hour before the funeral mass. Interment will be at Indiantown Gap National Cemetery in Grantville.Contributions may be made to St. Margaret Mary Church or the Alzheimer's Research Foundation in her memory. DAILEY